Laetare Sunday and our Anglican Patrimony 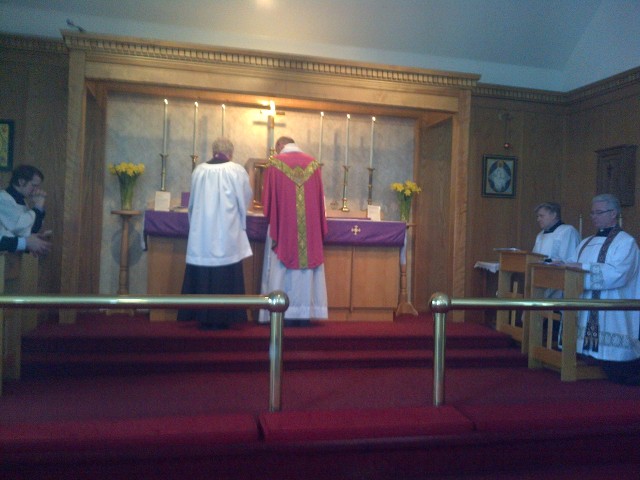 What a joyful day at Annunciation of the Blessed Virgin Mary this Sunday!   Laetare Sunday, one of two days of the year our priest wears Rose vestments.

And as part of our Anglican patrimony, we had a Simnel Cake blessed on the altar, as well as blessed daffodils handed out to the ladies of the parish and quite the feast downstairs after Mass with a formal tea and recognition of our annual “Mother of the Year” who is our dear Barbara Reid, our Matushka, who will be leaving for Victoria with her husband Fr. Carl Reid after Easter.

While the introit was in keeping with Laetare Sunday, the readings we had were consistent with that of the Roman Church for Lent 4, so Father Carl preached on the readings. A great, thought-provoking, meaty, interesting sermon. And our hymns were utterly sublime today.

Now, I saw this on Facebook on our Dean Father Lee Kenyon’s page about their plans for today:

Mothering Sunday this Sunday. Rose water for the Asperges, roses for the altar, daffodils for mums, three simnel cakes, rose vestments, a parish lunch to include cupcakes with rose decorations (it *is* Refreshment Sunday after all), rosa mystica incense, rosé wine, and part four of the Lent Course, which will be all about relics and reliquaries. I *think* we’ve covered everything…

I brought a bottle of Rose today but we decided to save it for our reception in honor of Fr. Carl and Barb next Sunday following our monthly choral Evensong and Benediction of the Blessed Sacrament.  I am also tasked with getting an addition bottle of sherry.

Now, Fr. Hunwicke has this to say about Mothering Sunday:

‘Mothering Sunday’ is intimately bound up with the Vetus Ordo liturgical propers for Lent IV, when the Roman Pontiff went to the Basilica of S Crucis in Jerusalem, built upon cartloads of soil from Jerusalem, designed to be ‘Jerusalem-in-Rome’; and the texts were about Jerusalem, the True Jerusalem, the Jerusalem quae sursum est, quae est mater nostra. Wonderful texts; wonderful Biblical exegesis bound up in them. Upon this grew the easy, pleasant social customs of Mothering Sunday. This is a superb example of the combination, within our Christian culture, of high theology, high liturgy, graciously incarnated into popular customs so attractive that they even have the power to survive the demise of the culture which gave birth to them. ‘Inculturation’, and with a vengeance! But none of this had any weight with those who after the Council, ruthlessly, unreflectively, demolished the liturgical foundations upon which this entire superstructure rested.

And, of course, similar points could be made about the Festival of S Valentine. And here I have our beloved Holy Father Pope Francis with me. He had a ginormous gathering of engaged couples organised on that day, and he preached to them about … er … Ss Cyril and Methodius? … the importance of the Cyrillic Alphabet?the necessity of using papal authority to discipline (as S Methodius did) the German bishops?

I think it would be very useful to help the Catholic laity to understand that, when they hanker after Mothering Sunday and S Valentine’s Day, they are in fact manifesting their instinctive, praiseworthy, preference for that liturgical culture which constitutes the ‘bad’, ‘regressive’, Traditional Latin Mass. It is noteworthy that, in the half-century since the Council, the post-Conciliar liturgical texts have not themselves had any apparent power to inculturate themselves into our society and to generate anything similar to what the classical texts had produced. Those who most vigorously promote the new texts seem, in practice, much more determined to ignore the texts they sponsor and to create a parallel calendar of ‘Missions Sunday’, Thingummy-gig Sunday … and all the rest. There so often seems to be something which it is so very much more important to preach about than the lections which the 1960s proudly bestowed upon us when they stole Mothering Sunday away from us.

7 Responses to Laetare Sunday and our Anglican Patrimony